Earlier this week, a photo of Super Junior’s Sungmin and Kim Sa Eun‘s wedding invitation was revealed online, drawing attention and receiving congratulations from their fans. More recently, another picture was added, showing a whole different ambiance from the one firstly revealed.

The boy group member and his fiancé, musical actress Kim Sa Eun, announced plans of their marriage not so long ago. The earlier revealed this photo of the couple’s wedding invitation drew much attention from their fans for its calm nature. In the picture, the couple is wearing vintage high school uniforms and sitting next to each other on the bench. They are looking at the front, gazing straight into the camera while tilting their head to the same direction making the image lovable. In the green and pink clouds hovering near the couple are the two courters’ names written in Chinese characters. 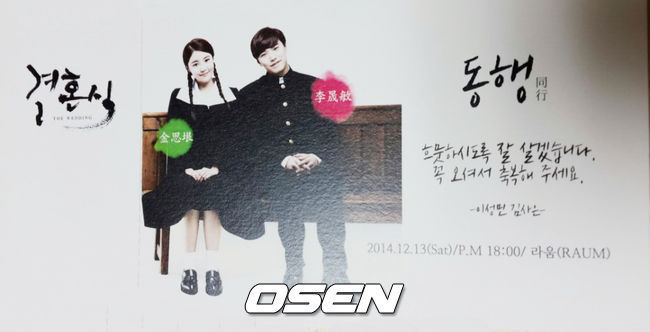 The newly revealed photo is part of the couple’s wedding pictorial with the date of their upcoming wedding written in the corner. Sungmin is dressed up in a black tuxedo with a cute and matching black bow tie and a red handkerchief in his pocket. Kim Saeun is dressed in her pure white dress which is lacy on the top, making her look more elegant. The couple is holding hands while hugging each other closely, exposing their love to the guests. Compared to the wedding invitation photo revealed earlier, the new photo shows elegant and classy sides of the couple. 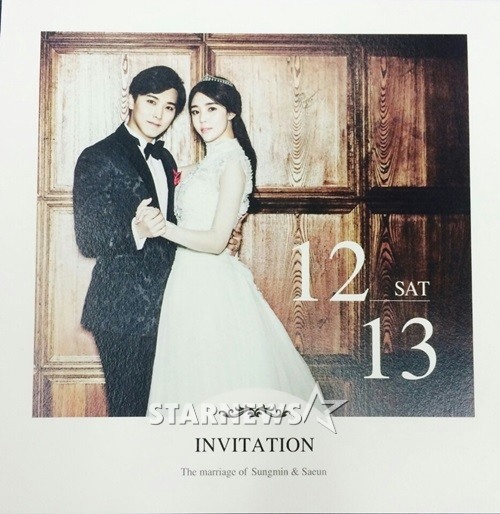 Inside the wedding invitation is written a phrase of a poem by Lee Yi Chae, a South Korean young poet at the age of 26. It goes, “I had this beautiful premonition. We will be holding each others’ hands forever.”

Sungmin and Sa Eun also wrote in their wedding invitation that “Loving the stage, we met each other as D’Artagnan and Constance. With the faith in ourselves that is almost likely to move the Earth, we will be the angels to protect each other and proceed together through our life.”

The couple’s wedding is set for Saturday, December 13, 2014 at 6:00pm. It will be held at RAUM, a private wedding hall located in Seoul, South Korea. Featuring in the musical Three Musketeers together last year, Sungmin and Saeun developed their friendship into a romance, and finally announced their wedding earlier this year.