As rumors of EXO-M member Tao leaving the group have been spreading, netizens have dug up photos of the singer’s past interactions with the group that might indicate he was being bullied.

Since Tao’s father shared an emotional letter revealing he would be bringing Tao back home to China, EXO’s agency SM Entertainment has confirmed the dispute, and fellow members Lay and Xiumin have removed themselves from social media outlet Instagram.

In trying to figure out why Tao allegedly agreed to leave EXO, some fans have theorized that in addition to injuries, the singer was also being bullied by members of his group. In a recent article by Herald POP, photos of EXO members allegedly bullying Tao surfaced, and netizens gave their opinions on said photos.

If you look there, Taeyeon’s pathetic boyfriend wipes his hands when they touch with Tao as if he got them dirtied ㅋㅋㅋ I’d leave if I were Tao and got this treatment too

2. [+129, -24] Saw the gifs and they look a bit out of line to just be considered fooling around… Sure it’s funny to the person pulling the joke but he didn’t look happy about it, and no I’m not an EXO fan ㅡㅡ

3. [+124, -26] Tao looked pissed off in the gifs. And whoever that member is that’s starting that stuff doesn’t look like he’s playing around, he looks like he means it.

4. [+46, -3] Judging from his facial expression and gestures, it doesn’t look like they’re playing around. Come on, this is bullying. 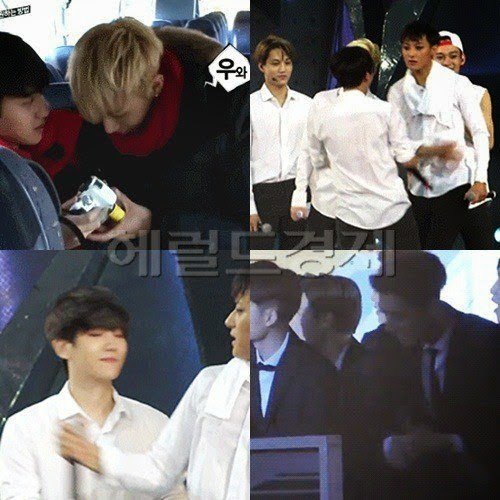 Other fans, however, have argued that the photos and gifs were taken out of context and that the boys were merely playing around. By showing clips and photos of the group showing Tao affection, fans attempt to disprove the bullying theory as to why Tao might leave EXO.

One fan who does not believe Tao was being bullied by the other members, wrote:

“Hello, I’m just a normal EXO fan. When I initially ran into such a preposterous article about Tao being bullied us fans did not think that it even deserved a response and ignored it. Soon however we saw it on the main page and people began to believe the maliciously edited images that made Tao look like he was being bullied.

When we saw the article and the fact that it said “Tao, bullied” as a fan I just laughed.

Fans know that how ridiculous this article is. Yet people who aren’t fans simply believed in the editted so called ‘evidence’ of the article. Below are gifs that hopefully convince you otherwise.”