1. EXO released a repackaged edition of “The War” entitled “The War: The Power of Music” on September 5, 2017 and promoted the new single “Power” until September 24.

2. S.M. Entertainment released an MV for pre-release track “I Need U” from Lay’s solo album “Lay 02 Sheep” on September 25.

3. On October 7, Lay’s birthday, he released his first studio album “Lay 02 Sheep” as well as the music video for lead single “Sheep”. He held a showcase in Beijing four days later, after breaking five records on QQ Music — hitting Diamond status in 9 hours and 11 minutes.

4. On November 3rd, EXO received a Prime Minister Commendation award at the Korean Popular Culture & Arts Awards, in recognition of public service and excellence in their field.

5. Chen collaborated with indie singer 10cm for an SM Station track, “Bye Babe”, achieving his dream of collaborating with the singer. The track was released on November 3, featuring lyrics written by Chen and 10cm.

6. The film “Room No.7” was released in South Korea on November 15, starring D.O. as a part-timer who discovers a corpse in the DVD room he works at. The film debuted at number one among the Korean films.

7. EXO kicked off their 4th world tour, “ElyXiOn” at Seoul’s Gocheok Sky Dome from November 24 to 26.

8. Then, on November 25th, D.O. won Best New Actor for his performance in My Annoying Brother at the 38th Blue Dragon Film Awards, sometimes referred to the Academy Awards of Korea. 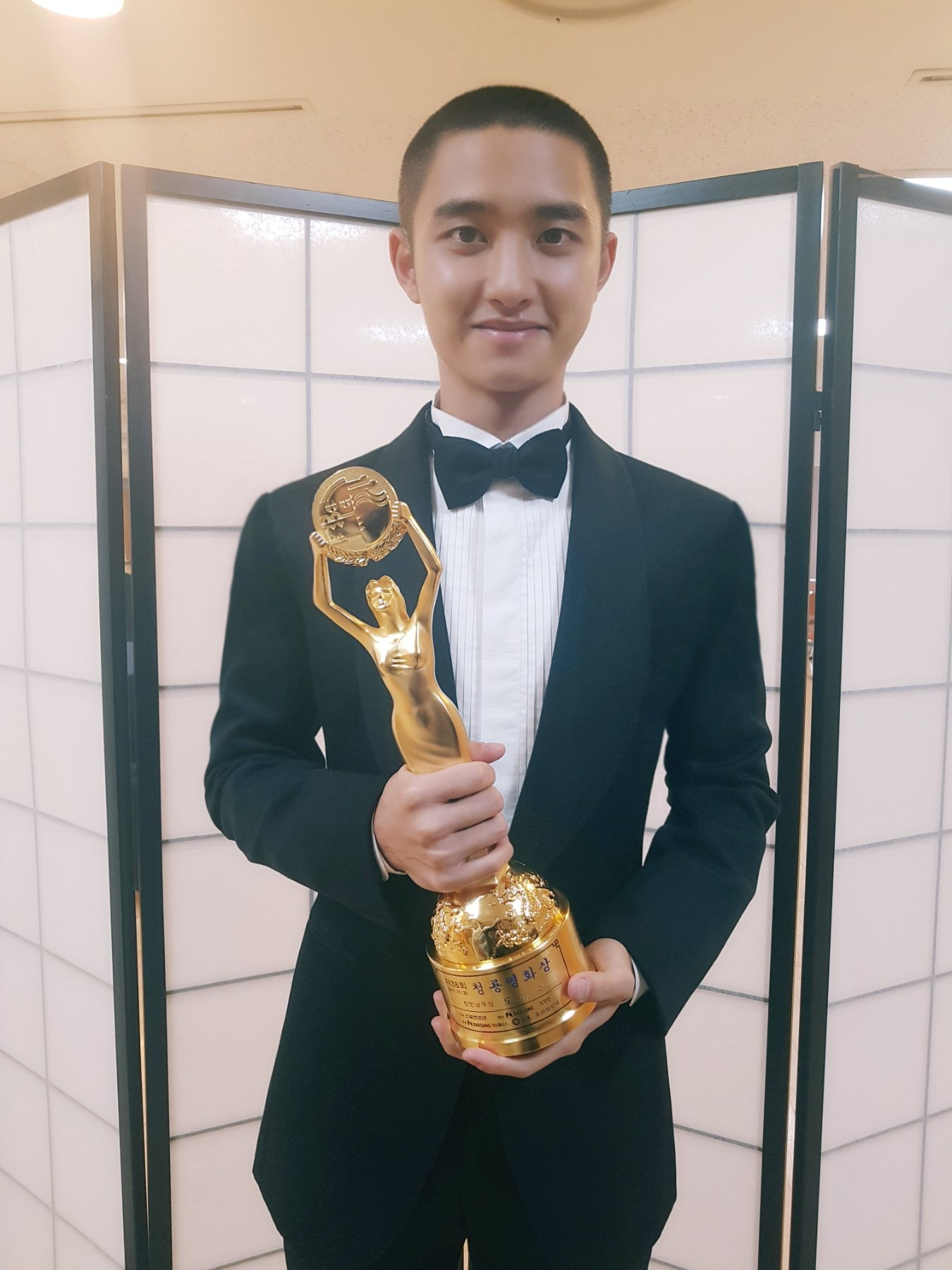 9. Kai was chosen as the cover model for the December issue of “The Big Issue”, a magazine that helps out the homeless. 80,000 copies were sold over all, recording the highest number of copies sold ever.

10. On December 1st, at the Mnet Asian Music Awards, EXO won Album of the Year and Mwave Global Fans’ Choice.

11. In December 2017, Suho began his first lead role in a musical “The Last Kiss”, playing the role of Crown Prince Rudolf.

12. On December 9th at the Melon Music Awards, EXO walked away with Artist of the Year, a Top 10 Artist Award, Best Male Dance Track, and Netizen Popularity Award. Chen also received best Rap/Hiphop award for his track “Nosedive”, a collaboration with Dynamic Duo.

13. A short version of the MV the lead single from their first full-length Japanese studio album “Electric Kiss” was release on December 6.

14. On December 20, 2017 “Along with the Gods: The Two Worlds” was released. D.O. played Private Won Dong Yeon, and was an integral part of the movie which is now the second highest-grossing film in South Korea.

15. EXO’s fourth winter album “Universe” was scheduled to be released on December 21 but was delayed until the 26th due to the passing away of SHINee’s Jonghyun.

16. They performed in Fukuoka for three days straight from December 22nd to the 24th. At their first ElyXion in Fukuoka concert, they dedicated their final song “Angel” to Jonghyun.

EXO dedicated Angel to Jonghyun
Chanyeol shouted Jonghyun’s name
Chanyeol was wiping his tears away at the end
Jongin cried for Jonghyun
Junmyeon had a hurt expression
Kyungsoo said, “Let all be happy so that Jonghyun can be happy too.”

They love him so much 😢❤️

EXO Does Special Performance For Jonghyun, Says Final Goodbye Together With Fans

18. On January 16, “Power” became the first K-Pop song to play at The Dubai Fountain at Burj Khalifa Lake, Dubai. The members, excluding D.O. and Lay, travelled to Dubai to view the first showing and had an exciting time there.

19. The first episode of Idol Producer or the Chinese boy version of Produce 101 was released on January 19, 2018, with Zhang Yixing as the representative National Producer and main MC.

21. On January 31, EXO released their first full length Japanese album “Countdown” which debuted at number one on the weekly Oricon chart.

22. Baekhyun sang the national anthem at the opening ceremony of the International Olympic Committee general assembly on February 5th.

23. Ten days after its release, “Countdown” was certified Gold by the Recording Industry Association of Japan on February 9th. This means EXO sold over 100,000 copies within only 10 days!

26. They zoomed back to Korea immediately after, as February 25th was the day of EXO’s iconic closing ceremony of the 2018 Winter Olympics in Pyeongchang. 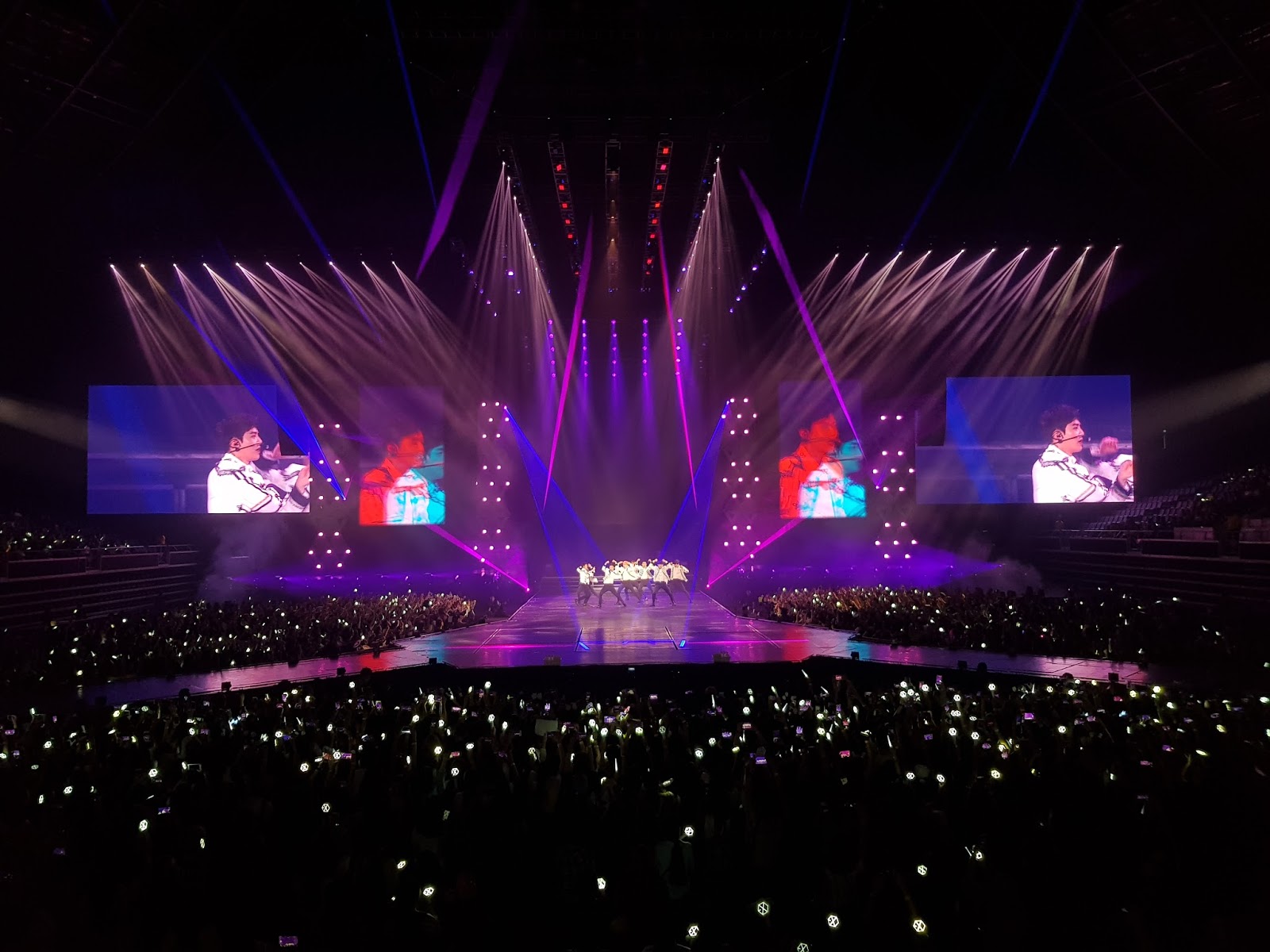 30. EXO was announced as the new brand ambassadors for MLB in Asia and on March 23rd, Chanyeol, Kai and Sehun attended the grand opening of the MLB store in Hong Kong.

32. EXO joined their SMTOWN family for SMTOWN LIVE in Dubai on April 6. The whole family also watched the fountain show featuring “Power”, and it D.O. was able to see the event for the first time ever.

34. On April 19, the Korean Mint Corporation unveiled nine official commemorative medals for EXO, honouring them for their contribution to the global spread of Korean culture.

36. The first season of Busted! a mystery murder slash variety game program and Netflix‘s first original program showcasing an all-Korean cast premiered on May 4, 2018. Sehun was one of the stars for the show and is confirmed for the second season as well!

37. In May 2018, Suho starred in the South Korean adaptation of Japanese drama Rich Man, Poor Woman. He played the role of an IT company founder in the drama, officially titled Rich Man.

38. On May 9, EXO-CBX released their first Japanese studio album, including title track “Horololo”. They went on tour shortly after, visiting Yokohama, Fukuoka, Nagoya, and Osaka.

39. The first of five episodes of Salty Tour featuring Chanyeol as he explored LA and San Francisco aired on May 26, showcasing Chanyeol’s pleasant time in California.

40. Sehun was named best-dressed man at the Louis Vuitton Resort 2019 show held in France on May 28th. He sat front row, a coveted spot, rubbing elbows with the likes of Emma Stone.

41. Kai made his first major front row appearance at the Gucci Resort 2019 show on May 31, in the South of France.

43. Kai came back to Instagram on June 6 and broke Kylie Jenner’s record for gaining the most followers in 10 hours.

44. Kuala Lumper met with EXO at the Axiata Arena, with 10,000 fans gathering for ElyXiOn in Malaysia.

45. On July 1, “Prive by BBH“, a streetwear brand that Baekhyun is the co-creative director of released to the world and the first six-piece collection was instantly sold out.

46. In July 2018, Suho returned to the theatre playing the role of Gwynplaine in “The Man Who Laughs”. He received a standing ovation and positive feedback from the audience on the musical’s first day.

47. D.O.’s animated movie “The Underdog” was released at the Bucheon International Fantastic Film Festival on July 2018, and set a record for the shortest time for an opening film at the BIFAN to be sold. It will be released officially in the 4th quarter of 2018!

48. On July 13, the 40th and final episode of Travel the World on EXO’s Ladder aired. The show followed EXO-CBX as they travelled around Japan’s coastal Tottori Prefecture together!

51. EXO was appointed as Korean Tourism Ambassadors for 2018 by the Korean Tourism Organization in July 2018, appearing in an extensive campaign designed to promote Korea to the world.

52. On August 3, Lay made his first US appearance at Lollapalooza during DJ Alan Walker‘s set, performing a remix version of Lay’s “Sheep” by Walker.

53. Although unorthodox, EXO visited one more city following their “encore” concert in Seoul and performed for 20,000 fans in Macau on August 10 and 11.

57. Baekhyun released Station X 0 track “Young” with rapper Loco on August 31 which hit No. 1 on the realtime charts of music sites including Melon, Genie, Bugs, Soribada, and Olleh Music.

55. Tommy Hilfiger hosted a #TommyNow extravaganza in Shanghai on September 4, and invited brand ambassador Chanyeol to the star-studded event where he was named “Best Dressed” by Vogue.

56. Dokgo Rewind, a webdrama starring Sehun as both a model student and rebel, premiered on September 7. Look forward to more acting projects from Sehun in the future.

57. On September 10, 2018, D.O.’s first drama in which he plays the lead began showing, titled Hundred Days’ Husband. It is currently ongoing until October 29 and is enjoying viewership ratings up to 10.9% — even on a cable channel!

58. Xiumin opened up a new Instagram account as well on September 10, greeting fans with some photoshoot snaps.

59. EXO headlined Music Bank in Berlin, getting the opportunity to meet German EXO-L on September 15. Chanyeol prepared a special performance of “Winds of Change” by German band The Scorpions as well!

62. Kai was in full Gucci brand ambassador mode, at the Gucci Spring/Summer 2019 runway show in Paris on September 25.

63. On October 1st, EXO dropped a mysterious graphic on their social media. Two days later they dropped the official name of the album “Tempo”, album art, and the track list as well. They also revealed that Lay took part in recording the Chinese tracks as well as filming the music video.

64. Lay is set to debut in the U.S. under the name Lay Zhang on October 19, the same date his second studio album “Namanana” will be released. He pre-released the track “Give Me A Chance” on October 7, his 27th birthday.

There are still about three weeks until the album drops, but never fear EXO-L, the album is coming. Although the wait was long, at least EXO worked hard to keep you all well fed this year!

EXO Is On EXO Suho’s Mind 24/7, Even When He’s Having The Time Of His Life In Dubai

K-Pop Festival HallyuPopFest Is Set For London, And Here’s Everything That’s Happening

10+ Times EXO Proved That They Are The Kings Of Harmony