After accidentally uploading a photo of himself playing a pirated version of an old Pokémon game, EXO‘s Chanyeol issued an apology on his Instagram account for his actions.

Having downloaded the game likely using a secondary source such as a game emulator, Chanyeol was called out by one of his followers who noted that the old game isn’t legally accessible on mobile devices. After coming under fire for illegally downloading the game, Chanyeol deleted his original and posted an apology for his actions in its place.

Many netizens criticized Chanyeol’s decision to illegally download the game, pointing out that he’s being hypocritical by pirating games while asking fans to purchase his group’s music. His fans, however, have defended his actions, noting that he has apologized and has learned from his mistakes. 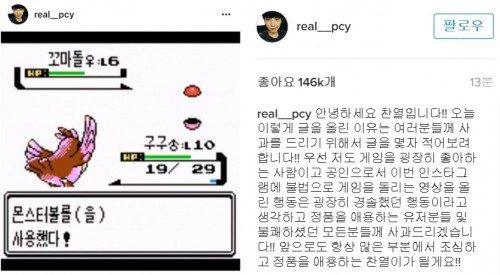